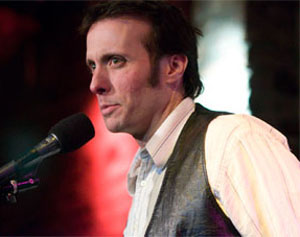 That’s my professional life in a nutshell.

The living is done in upstate New York. The writing is done in basements and barns, attics and towers, huts and hobbit holes, plus the occasional monastery in Mexico.

I earned an MFA at Hunter College, where I studied with Peter Carey and Colum McCann.

The rest will be told in third person.

He’s worked as a tour guide at the Mystic Aquarium in Connecticut, run a youth hostel in Albuquerque, New Mexico, been slimed as a salmon packer in Naknek, Alaska, provided showers for homeless men on the Bowery, and proudly served four years as docent and caretaker for the Edgar Allan Poe Cottage in The Bronx. Edgar Allan Poe Cottage in The Bronx. His stories and essays have appeared in The Brooklyn Rail, Mississippi Review, Glimmer Train, Rosebud Magazine, Creative Non-Fiction & The Fairy Tale Review. He’s told stories live on stage with The Moth The Moth and been heard on NPR’s The Moth Radio Hour, as well The Story Collider, RISK, The Liar Show, and The Truth podcasts. Most recently he was awarded the Leon B. Burstein scholarship for Mystery Writing from the New York chapter of Mystery Writers of America in order to complete his first novel, currently titled Poe & I, based on his time in The Bronx with Edgar.

There are no upcoming events at this time.